No more “either-or” for parallel vs. perpendicular layout 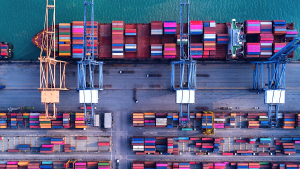 Before a terminal is built, the layout must be planned with foresight and the various scenarios calculated in detail.Whether the blocks of a terminal are better arranged parallel or perpendicular to the water side depends on the respective conditions, such as the nature of the terrain, the type of cargo handling, the transhipment rate and the planned use of automated equipment. Changing the layout at a later date seems almost impossible today. The construction work required to pave the site and build the rail tracks for the rail mounted gantry cranes (RMG) is too expensive and complex.

Terminal layout from a historical perspective

In the 1960s and 1970s, terminals were primarily parallel layouts. It was not until the advent of fully-automated terminals in the 1990s that perpendicular layouts were on the rise, where horizontal transport was also automated. The ECC Delta Terminal in Rotterdam (Netherlands) and the terminal in Altenwerder (Germany) can be regarded as pioneers in this respect. Today, however, a mixed form is mostly found worldwide: There are automated and non-automated blocks. To date, it is not possible for automated and manually driven vehicles to travel on the same road network. The automated blocks and roads must be secured by fences. It is then only possible to drive in these areas for a short time after switching off some functions of the automated vehicles.

In the perpendicular layout, the automated stacking cranes (ASCs) transfer the containers to the vehicles at the narrow end of the blocks, usually in 4-5 transfer locations. In this end-loaded principle, the ASCs have to travel long distances, while the straddle carriers or other transport equipment have to travel short distances. Therefore, perpendicular layouts are limited in depth. On the waterside, the distances are short due to the many transfer areas (waterside transfer area) between block and container gantry crane, so that very fast horizontal transport for the ship handling is possible. In addition, in the perpendicular layout, the separation between landside and waterside transport can be implemented well, so that here the vehicles do not obstruct each other and the vehicles for landside transport do not have to drive far into the yard. Especially when parts of the horizontal transport are automated, these blocks can be separated more easily from the other road networks in the perpendicular layout. For terminals with a high transhipment share of 30-50 percent or more, the parallel terminal layout is more suitable, as the waterside transfer points in the perpendicular layout do have much more workload than the landside ones. A disadvantage, however, is that the cranes in this layout have to cover a lot of distance and this is very energy-intensive due to the size and mass of the gantry cranes.

Two new developments will have an impact on the layout planning in near future:

Whether horizontal or perpendicular, planning since the 1990s has mainly been determined by which areas should be automated. The separation of these areas that exists to this day will likely become obsolete with the advent of autonomous vehicles. Until now, Automated Guided Vehicles (AGVs) could only drive according to a predetermined plan provided by a central traffic control system and were unable to react to their environment. But if autonomous trucks or other vehicles can “sense” and respond to their environment themselves, manual and autonomous vehicles could travel in a shared path network in the future. The previously automated traffic networks would no longer need to be fenced off. Investigations and initial implementations of autonomous vehicles are currently taking place at terminals. One thing is already certain: this technology will very definitely lead to a need to rethink terminal planning. The previous separation of areas and thus the decision as to whether it should be a horizontal or perpendicular design will no longer be necessary and mixed terminals will certainly be seen more frequently. Terminals that have had manual horizontal transports could even move directly to autonomous vehicles without the step over automation, which will save them a lot of area separation effort.

What to do when market conditions change?

What will remain difficult in the future, however, is a possible redesign of the terminal if, for example, the transhipment rate were to change. The existing tracks for rail mounted gantries and the related special pavement in particular stand in the way of a conversion. One way out of this, however, could be new types of yard cranes -like the “Freerider” from the Kuenz . These rubber tired gantry cranes (RTG) run on tires and are able to transport containers while driving. Although they are still inferior to rail mounted gantries in terms of speed, they may provide more scope for redesigning the terminal layout, which may not be insignificant in rapidly changing market conditions such as those currently prevailing.

And these new concepts are not the last developments, which will impact terminal planning. Other ideas of stacking and transporting containers in the port are already there. May it be the High Bay Warehouse for containers (e.g. the “BoxBay” concept) or concepts of integrated yards, where flexible trolleys comparable to Overhead Bridge Cranes are picking up container directly under the STS crane at the quay and transport and stack them in the yard (e.g. “NGICT”).

And more will come …

A Digital Twin for the EUROGATE Container Terminal Hamburg