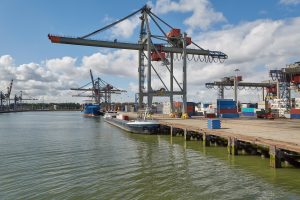 The port and terminal industry is going for more integration and automation across various levels of the processes. Due to this the terminal industry is striving for more standards and does that in different initiatives such as the Terminal Industry Committee 4.0 (TIC4.0), “Port Call Optimization” or others. Often standards don’t need to be reinvented because there are some existing standards in the industry such as IMDG, BIC or ISO. But these are often too little process oriented to help with the integration and digitization. Therefore, the initiatives put these standards and new definitions in a process-oriented context. These standards are meant defining industry wide standards and therefore are required to drive forward the integration, digitization and automation on various levels more efficiently.

Earlier this year I spoke at an online conference at Connect2SmallPorts project (C2SP) which is an EU funded initiative to push digitization for small ports and terminals in the Southern Baltic Sea. After discussing and being in contact with this project, the question came up: Are small ports and terminals benefiting from standards or is this only something for big ports or terminals with big automation projects?

The target of standards is usually the same across an industry: limit or eliminate the need of custom implementations in interfaces, data structures or interpretation of data. The aim is to come closer to a “plug and play” solution across various implementations. This is supposed to safe both time and costs for projects. Same time it can increase the number of possible suppliers and keep the terminals more flexible on selecting their best solution. If all follow the same general standard, a market leader cannot push on his own “de-facto” standards and be the only supplier suitable on the long run. This is something we already see a lot on the consumer market where vendors try to push proprietary standards in order to have customers locked into their solution universe. Probably a very successful and know player doing this would be Apple with phones (etc.), own plugs and iTunes as a software layer (others are not acting much different). If you are bound to one technology, it is hard (and/or expensive) to get out of that universe again.

TIC 4.0 Member Interview – Boris Wenzel Member and President of TIC on: Why to join TIC4.0