The IHATEC joint project TwinSim pursues the development of a digital twin at the EUROGATE Container Terminal Hamburg (CTH) to visualize and optimize operations. As project partners, our terminal experts at AKQUINET are responsible for the visualizations of the terminal, the development of dashboards and simulation components. We talk to Prof. Dr. Holger Schütt, who is leading the project at AKQUINET, and his colleague Anja Jablonski, who is responsible for the technical realization and model construction of the digital terminal.

What is the Twin Sim project about?

Holger: At a terminal like the EUROGATE terminal in Hamburg, there is already a lot of data, whether self-generated or coming from outside. The question is always: How can I use this data? Now EUROGATE wants to build a digital twin of the terminal, i.e. as complete a computer-based model of the terminal as possible in real time. To create this model, much more data than usual must be collected and made available at the terminal. The twin is not to be created for its own sake, but EUROGATE is pursuing two goals with it: 1. improving internal processes and 2. optimizing the maintenance activities of the equipment. The second goal is similar to an innovative predictive maintenance approach, as it is also realized in the Industry 4.0 environment.

EUROGATE is already a CHESSCON customer, isn’t it?

Anja: Yes, EUROGATE has, among other things, used our CHESSCON Virtual Terminal at its terminals in Bremerhaven and Wilhelmshaven to secure the introduction of a new control system (TOS). In Bremerhaven, the Yard-View module supports the yard planners in their daily business. Now, however, we want to visualize far more equipment in Hamburg than before, and for the first time in real time. Via a direct connection to a central data lake, the CHESSCON Virtual Terminal will display all devices where they actually are. Currently, the latest data on containers, quay cranes or straddle carriers is only ever downloaded at the push of a button and displayed in the CHESSCON Virtual Terminal.

Anja, what is your role in the project?

Anja: My role is to model the real container terminal using our CHESSCON solutions. I do this together with our chief developer Horst-Dieter Kassl and his team in development. I import the data for the many devices into our 2D editor and create them there. We also have to draw some devices or objects ourselves. I have device information for this and also the information about the quantity of these devices on the terminal. Then I add the road network in the 2D editor. After the terminal is drawn, I make sure that the model also looks as real as possible in three dimensions. Finally, our developers bring the model to life by connecting the actual data to the model. To do this, they have previously set up appropriate interfaces so that this data transfer takes place automatically and in real time.

Which devices are to be mapped in the virtual terminal?

Anja: In addition to containers and straddle carriers, we will even receive sensor data from the light poles, for example. So, if the lamp is not burning in the model, it is actually defective. In addition, we will receive much more data about the machines and vehicles than just the location. For maintenance work, we also need data such as tire pressure and oil and battery levels. In addition, there is the external data from the shipping companies or freight forwarders, which we integrate into the model. Among other things, they provide the arrival times of the ships or external trucks and the unloading and loading information of the containers.

How can you derive meaningful insights from this vast amount of data?

Holger: Our visualizations make the data much easier for us humans to recognize. After all, the human brain does not function in lists, but pictorially. I can interpret a lamp that doesn’t shine in the picture more easily than the raw data set for it. Beyond the actual depiction of reality, in CHESSCON Yard View we can, for example, color all containers for the next ship departure at their current locations. This makes it possible to see at a glance where these containers are located in the yard. Beyond these visualizations, we also build dashboards to make insights and also forecasts into the future collected as simple and intuitive as possible.

What dashboards are there to be, for example?

Anja: The conception of the dashboard software and the alignment with the existing interface will take place in March 2023 based on Eurogate’s individual demands. It will analyze the current work status at the container terminal and present it in special key performance indicators (KPI). The dashboards will be developed according to user requirements in a user-friendly way. This means that the dashboard component shall be displayed directly in the 3D visualization and shall include the presentation of all KPI’s both numerically and in graphical view. Continuous monitoring is thus made possible.

For example, the ongoing container gantry productivity, usually measured in boxes per hour, is calculated and displayed in the dashboard. The benefit of this dashboard component is the early detection of bottlenecks or too low productivity in order to be able to take early measures to ensure high availability and smooth operation. For stacking devices on the terminal, a colored representation of the operational productivities is conceivable, such as coloring devices with high productivity in green and devices with too low productivity in red. For maintenance-related data such as fuel or battery level with messages such as “recharge/fuel battery within the next 15 minutes”.

How long is the project scheduled to run?

Holger: The project has a total duration of 36 months. It started on October 1, 2021, and will run until September 30, 2024. In the first milestone, the requirements analysis is to be completed by the end of March. The big data lake is then to be ready in full functionality by the end of May 2023 and a first and second application stage of the digital twin developed from this by the end of September 2023 and the end of December 2023 respectively. In the last nine months of the project, the evaluation of the application is to be completed. The question here is how the project goals can be achieved on the basis of the digital twin using artificial intelligence or other methods. The individual project phases start partly in parallel, so that we could already start with the visualization of the terminal.

When can we expect the first views of the digital terminal?

Holger: We should be able to show the first views of the digital twin already in 2022 using our 3D-Live View configured to Eurogate’s demands. After that, the “twin” will be gradually expanded with additional objects and their data step by step based on their availability in the data lake until the end of the project. I am confident that at the end of the project we will be able to demonstrate the prototype with the required functionalities including the simulation and AI-based optimization components mentioned above.

Thank you both, Anja and Holger, for the interview! 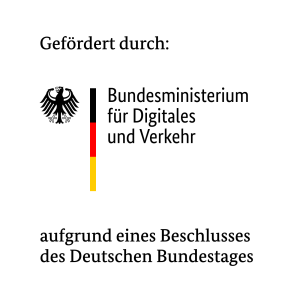