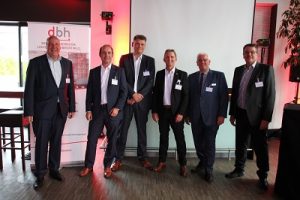 The latest software tools are essential to managing the flows of goods at sea ports and hinterland hubs – that was the general agreement among the speakers and 60 trade visitors at the evening event on September 12, “The Port of Today”, organized by the ShortSeaShipping Inland Waterway Promotion Center (SPC) at the Pegelbar in the Port of Neuss.

Marcus Nölle (SPC) about the port of today

“The demands on sea ports, which are no longer merely transshipping sites, but also offer value-added services, continue to increase relentlessly: digitalization, port safety and security, and growing ship sizes – those are the main topics,”

“The better and more modern a port is, the greater the likelihood that it will actually be used.”

Andreas Grundwald (dbh Logistics IT AG) about the port of today

“Our platform takes care of the data handling alongside the goods handling”,

says Grunwald, who still remembers when port communications were handled by couriers and messengers back in the 1980s. Since dbh was founded in 1973, the spectrum of services the company offers has grown along with the technical possibilities and customer needs. With its different modules, the current PCS can be flexibly adapted to customer requirements. Customers in the hinterland are already using it to communicate with the partners at the sea port. The application runs at the dbh data center and is billed on a per-transaction basis.

Norbert Klettner (RBS EMEA UG) about the port of today

Norbert Klettner, managing director of RBS EMEA UG, outlined the challenges that a TOS (terminal operations system) has to master – in addition to the key competency of “modeling the handling activities”. First of all, a number of market participants have to be kept informed in real time. Secondly, an increasing number of data sources and interfaces has to be integrated – such as number, position, and status of the handling equipment, the documentation of the containers and their loads, and possibly damage and customs matters.

“The logistics are becoming more automated and more transparent,”

“Partners, customers, and government agencies need to be notified.”

This is where classic enterprise software hits its limits.

“The implementation is much simpler thanks to our cloud solution and can be completed in just a few weeks. Billing is based on TEUs,”

“I can manage an entire terminal with just a laptop and a standard browser.”

Timo Köhler (dbh) about the port of today

The data in the cloud can also benefit freight forwarders, as Timo Köhler from dbh described. When a pre-announcement is received, the software calculates the time and location when the container will become available and generates a code for the trucker and the terminal employees.

“The driver can then use this code to register on a self-service terminal at the gate at the calculated time and is given the loading point directly. At the terminal, the code tells employees which container they have to load onto the truck.”

The terminal can also be equipped with video gates, to ensure that the port software also knows which containers and vehicles are actually present, along with their current status. They document the vehicles and their loads in high-resolution images – which also provides information for customer inquiries in the case of damaged containers – and automatically feed the data captured from the license plate, container identification, and its various decal information into the TOS.

“The video gate extracts data from the pictures; we make pictures from this data. Because people think in pictures,”

he explained. In precisely modeled virtual ports and terminals, akquinet simulates – on behalf of customers – how the different factors affect the traffic flows and performance of the ports. After all, you can’t fine-tune a thousand different factors during live operations.

“We can commission a virtual terminal as early as the pre-planning phase and simulate its processes, to prevent traffic jams and congestion later,”

Simulations are also helpful after things are up and running, however:

“We offer training courses for terminal planners, who can play through shifts and try out new tactics at our training center,”

he says as an example. Yard planners also benefit from a real-time, 3D model of the terminal itself. In the simulation, containers can be assigned different colors according to various criteria, for example, highlighting all empty containers or containers for the next departure.

“This makes the terminal completely transparent for planners,”

“It enables them to optimize the terminal preparations for the next moves and shifts.”

Port of the future these days – Knowing how water moves goods