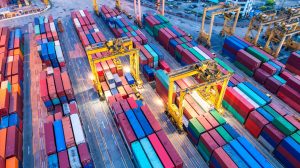 History of simulation in ports

Simulation technology has been used in the branch of ports and terminals since the 80ies of the last century for terminal layout planning and rough operational strategies. It became a standard methodology for answering questions, which are occurring during the various phases of a terminal:

Planners and terminal operators are not only looking at Greenfield terminals, also Brownfield ones (existing terminals with re-organisation or extension needs) are analysed using this technology to find the optimal mixture of equipment and layout decisions. E.g. Transnet’s Capacity Planning Group is checking each investment request from any of their South African terminals and in complex situation they simulate to secure the decision.

Beginning with the development of first fully automated terminals in the 90ies (ECT/Rotterdam, CTA/Hamburg) also emulation technology was implemented in this branch, resulting in Virtual Terminals, which provide test beds for the terminal Operation Systems (TOS) and for the start-up of terminals. In this case the simulation model of the terminal is directly connected to a test-instance of the TOS. In this way strategy improvements are tested before going live on the real terminal.

Digital Twin: What does that mean?

This means, the Digital Twin consists of three parts: The physical product, the virtual product, and the connection between the two products.

With the demand of more and more reliable and increased productivity and efficiency at terminals, caused by bigger vessels and higher throughput requests from the shipping lines, terminal operators asked for innovations in the software driven process optimization. Based on digitization, driven by more and more data generated by sensors and more sophisticated EDI systems, the idea of using digital twins for terminals was born.

Applications of Digital Twins at terminals

Three potential applications of this technology are:

This technology may support terminal operators to increase terminal’s efficiency by a mind-change in operational processes: Instead of monitoring the current operation only and re-acting on bottle-necks coming up, terminal’s control staff will in the future be informed about potential bottlenecks by the digital twin.